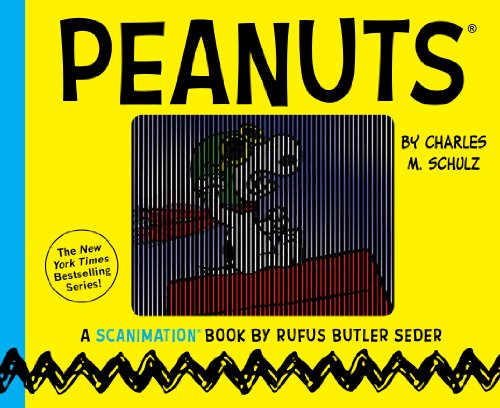 Good grief, the gang's all here! Charlie Brown, Lucy, Linus, Schroeder, Sally, and, of course, Snoopy these cherished characters from the most popular comic strip of all time meet the magic of Scanimation. Ten memorable scenes in clear and colorful Scanimations, with smooth-flowing, detailed images are brought to life in the book, each accompanied by the inspiring words of wisdom from Charles M. Schulz that make PEANUTS so special. Charlie Brown runs to launch his kite, with the caption Sometimes there are things you just can t resist doing. Snoopy does his happy dance: To dance is to live. Lucy skips rope: Life is more than just lying around. Plus Schroeder plays the piano, Snoopy battles the Red Baron, Sally dances with Linus, and Charlie Brown tries to kick and of course, as he will for all eternity, misses the football. PEANUTS is one of the most beloved and best-known brands of all time.Every day over 45 million people read the strip; its animated specials have aired on television for the past fifty years (growing in popularity A Charlie Brown Christmas was the highest-rated prime time special in 2012); it has millions of Facebook fans; and in 2015, to celebrate the 65th anniversary of PEANUTS, 20th Century Fox will release a 3D animated movie. And now, Scanimation. It's PEANUTS funny and wise and beloved, forever a part of our lives like you've never seen before."